With Christmas just around the corner and the winter season in full swing, the offseason for the construction industry has officially begun. Construction is usually one of the hardest-hit industries when the wintry weather hits. However, this month’s Snap Analysis reveals that overall the construction industry took a dip in contract awards by 24% in November but remained above average with a worth of £6.3bn, highlighting a not so quiet Christmas.

Within the contract award breakdown for the month of November, the residential and infrastructure sectors, the two largest sectors in the industry, had a weaker month which caused the dip. However, a strong showing from all other sectors lessened the fall.

A sector which had a near-record November, with £500m worth of contract awards is the Medical and Healthcare sector. The sector has an 89% month on month increase and a 130% increase on Q3. Alongside having a good month for contract awards, the pipeline is also looking healthy for approvals and applications. This month, there were £240m worth of approvals, with an RSI (Relative Strength Index) of 85. Applications soared this month, with a 200% increase month on month and an RSI of 98. 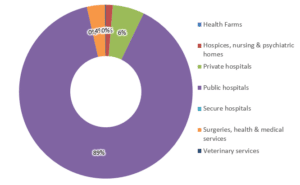 A reason for the surge in public hospital projects could be due to the Governments 2030 build target. This programme will see 40 new hospitals built across the UK by 2030. When the building pledge was first made, it was assumed by all that brand new hospitals were going to be built. However, the report shows that in August 2021, the Department of Health and Social Care (DHSC) sent out a playbook to NHS trusts, which contained guidance on how to answer questions about the pledge.

Within the guidance, a “new” hospital is defined in three ways.

• A major refurbishment to the hospital building

This guidance comes from the Government wanting to hit the 2030 target. Projects such as new wings and refurbishments will help them reach it, as it is quicker to construct than an entire hospital.

Despite the pledge to build 40 brand new hospitals by 2030, it is refurbishments which are causing the increase in the Medical and Healthcare sector this month. This month 2 major refurbishment projects were described as the drivers of success for contract awards within the sector.

This project is the construction of a new clinical block within the existing infirmary. Located in Newcastle Upon Tyne, this project has a value of £65m. Construction of this project will begin in January 2022 and take 18 months to complete, finishing in July 2023.

The Royal Brompton Hospital is a major redevelopment project which is upgrading the facilities inside the hospital (Project ID: 12036758). This project has a huge value of £350m and is located in Chelsea, London. 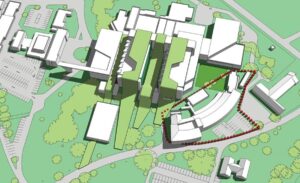 Barbour ABI offer 10 free construction leads, so like you’ve seen above, you can find out all details about any 10 out of the 1.8m projects they have live on their platform, free of charge! More detail such as who the contractor, architect, quantity surveyor is and more can be found out through claiming 10 free leads. Get your pipeline filled for 2022.

Get in touch today to find out more: Sales Leads & Market Intelligence for the Building & Construction Industry (try-red-plastic.flywheelstaging.com)