How the Low Carbon ‘Circular Twin’ Might Disrupt Traditional Projects

With COP26 nearly upon us, this first of two articles on low carbon construction features a Morgan Sindall-led initiative that aims to shake up how projects are delivered. Next week we will take a look at Costain’s Climate Change Action Plan and some of the industry issues encountered when devising it.

Lowering construction’s carbon footprint is increasingly termed the biggest single challenge facing the sector. With this imperative, Morgan Sindall is one of the businesses that has been supporting the development of an initiative termed the Circular Twin. The concept has seen virtual stakeholders that included procurement specialist Scape, both Lungfish and HLM Architects and consultant Cundall redesign the landscape of a conventional project setup in an attempt to turn the profit before carbon model on its head.

This saw the team digitally building an existing school with a completely reworked construction philosophy from start to finish so that each decision and design choice favoured a lower carbon outcome. 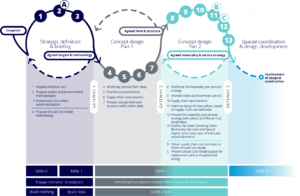 The notion stemmed from the realisation that traditional design and procurement inhibits low carbon construction, says social value and sustainability director for the construction side of the business, Louise Townsend.

“We got around 250 representatives from the construction industry in a virtual room during the first week of [the initial COVID] lockdown. It included other tier one contractors, customers, consultants, and [businesses] from across the entire supply chain,” says Townsend.

“We asked the question ‘what are the barriers to low carbon construction?’ The two core things that arose were that procurement inhibits best behaviours in terms of carbon management and that the operational budget rarely talks to the capital budget,” she says.

This is especially the case for Morgan Sindall jobs since the majority of its work is public sector where local government generally operates with an annual budget. “If you’ve got a one year budget that’s trying to address a 60 year whole life cost, it’s super challenging,” says Townsend. “That’s the root of it; the baseline for which you’re pricing but trying to address the whole life cost of an investment against an annual budget, and that’s where the [counterproductive] behaviours start.”

She makes the point that construction companies traditionally get involved in a project from around RIBA stages three to four, by which time all of the carbon is already designed in, leaving very little room for influence on the whole life carbon of that asset.

Following the big virtual event, Morgan Sindall held about 25 roundtable discussions with specific trades to get to a more granular level where these firms could explain how to improve the situation. The contractor then tested these findings and applied them to the school project it had originally delivered in 2017, with virtual project stakeholders playing roles that included Scape acting as the client.

But reimagining the established status quo to put carbon first wasn’t without its challenges, as Townsend explains. “Because this was such an unfamiliar concept, we all sat for about the first six weeks thinking ‘what are we going to do?’ because we had a development brief, but we didn’t have anything else. So we all fell back on our learned behaviours where the architect went away and designed a sustainable building with us thinking, ‘well, we can’t we can’t really do anything until it’s all there on the plans’”.
But the light bulb was about to switch on. “Then we had a moment of clarity and said, ‘if this is about carbon, then actually, it’s the performance of the building that counts, not what it looks like’”, says Townsend. “That was where the journey started because once you start to think about the value you want from this asset over its life – rather than what do we want the building to look like – it changes your view completely and what you’re trying to design.

“The first thing that we did as a team was decide on the performance of the asset. It’s the M&E engineer who knows how that can best be achieved and if we can get them talking to the cladding supplier it adds another dimension of the interface of the trades who know how their product is going to perform against [someone else’s] that it’s sitting next to.”

Morgan Sindall says this collaborative restructuring of the project landscape quickly bore fruit with a 67% reduction in whole life carbon compared to the original build and a 72% reduction in upfront embodied carbon (EC). It also saw a 48% decrease in lifecycle EC that achieves the RIBA 2030 and LETI (London Energy Transformation Initiative) 2030 EC targets.

Morgan Sindall says it also achieved a 52% reduction in annual energy consumption and that this all fell within a CapEx that remained ‘within standard budgetary parameters’.

The business is keen to roll out the lessons learned as Townsend explains. “We’re creating training modules for all functions in the business around the Circular Twin and then attempting to shape the way that we engage with supply chain partners to create a different kind of collaboration. That is what we’ll be focused on; ‘how can that stakeholder help me to address the embodied carbon in this asset?’” she says.