Contract awards in Education – The highest since 2017

Home / Contract awards in Education – The highest since 2017

The common assumption is that the education construction sector is mainly made up of higher education projects. Data from recent years, such as The Education Construction Market Report from AMA Research supports this assumption. As the report states that in 2018-2019 state universities and colleges were the drivers of the sector, holding the largest share of contract awards that year, with a value of over £2.2bn. 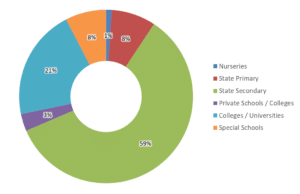 Below is a bar chart which displays the value of construction in education from September 2019-present. The chart shows that Q2 of 2020 is much quieter than the rest of the year, this is due to the COVID-19 outbreak and the country being in lockdown. Typically, the quieter months of the year are the summer months, due to the hot weather and holidays. However, in 2020 the summer months look busier than usual in comparison to Q2 as during this time the industry was heavily affected by the pandemic.

According to AMA Research, over the last few years the education sector within construction has been on a downward slope due to the contract awards falling by 30% since 2014. This decline is said to be because of the lack of refurbishment projects on existing schools. However, August has been a monumental month for the sector and Barbour ABI’s data supports this statement. The data shows that in June of this year, the contract awards were worth over £276 million and jumped to £657 million in August – an enormous jump in a 2-month period.

Our map, produced by our GIS Analyst Rob Baker, clearly displays the breakdown of projects in each region. The map shows that the majority of education projects are in the South East and London area. Whilst the majority of projects are expected to be in London, there has been a rise in education builds in Wales (3%) and Scotland (24.3%) since August 2020. Highlighting that the education sector is boosting the construction industry in all regions. 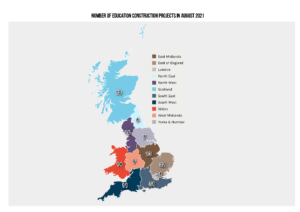 AMA Research’s 2019 report stated, “an acceleration of work on new programmes is expected to drive growth of 3-4% from 2020-21 onwards” and the introduction of a new programme has been identified as the main driver for August’s success.

The programme commenced in 2020-2021 after the Prime Minister stated he will commit over £1 billion to fund the first 50 projects, and a further £560m and £200m for upgrades and repairs to schools and further education colleges in 2020. This will transform hundreds of schools and improve the education of children across the country, by providing hundreds of thousands of students with energy efficient, new and improved school buildings and facilities. Some examples of what the programme will create are modern classrooms, dining rooms, sports halls and science labs.

The introduction of the transformative school rebuilding programme will not only benefit the pupils, but also the construction industry. According to the Department of Education, the programme is said to bring new opportunities to the construction sector. More apprenticeships, jobs and training opportunities will be created for those in construction, thanks to the programme. Also, to stay on track with the governments net zero target, the rebuilding projects will be greener and as a result will create highly skilled jobs for construction workers and give an overall boost to the sector.

The data within Barbour ABI’s latest Snap Analysis report shows that the contract awards for education has been increasing month-by-month and is currently at its highest since 2017. The construction of the rebuilding programme’s projects were due to start in Autumn 2021, which could be the cause of the peak. Following the pattern in the data, combined with the lengthy ten-year programme the future is looking bright and busy for construction!

Another driver of success is Covid-19. But why? When asked to think of the impacts of Covid-19, it is easy to only think of the negatives. But what about the (very few) positives? During the pandemic, over 1.2 billion children worldwide were out of the classroom and had to adapt to online learning. Many believed students would be behind in their education once they returned to the classroom, however research shows that on average students retained 25-60% more information when learning online.

Much like the rest of the world, students also like to work online and the use of technology has now become a vital part of education. A supporting statement from Wang Tao, Vice President of Tencent Education, states “I believe that the integration of information technology in education will be further accelerated and that online education will eventually become an integral component of school education”. Therefore, providing schools with up-to-date equipment to create more efficient learning will surely be a key factor in the ongoing new builds and refurbishments.

The Barbour ABI platform allows clients to conduct a search to find exactly what they’re looking for. Multiple searches were carried out to find the top projects, in each sub sector, by value within education.

Montgomerie park primary school located in Irvine, Scotland (Project ID: 12541804), has a value of £14.5m. The project is a new build, 12 class primary school with an early years centre. Funding for this project has been granted by the Scottish government and will take 12 months to complete, with construction commencing in April 2022.

Chilmington green secondary academy in Kent (Project ID: 12438224) is a new build which will provide a new 1,140 place secondary school with associated classrooms, staff offices, a dining area, landscaping and parking, with a value of £30m. This project is part of the governments free schools initiative and will be a net zero carbon school, which will begin being constructed in October 2022 and take 29 months to complete.

Hartpury college is a new build with an estimated value of £5.9m (Project ID: 12502193). The build consists of a new teaching facility which will include a dining area, kitchen, break out areas and associated landscaping work. Located in Gloucester, the project began being built in August 2021 and will be completed in October 2022.

This £38m project (Project ID: 12433262) is a new five storey building, comprised of lecture theatres, seminar rooms and flexible research facilities which can be used by all staff and students along with associated landscaped areas. This project has a duration of 24 months and is set to be completed in August 2024. Based in Poole, it is referred to as The Poole Gateway Building Phase 2 and is subject to funding.

Barbour ABI customers can view all projects above in more detail through searching the product ID. If you aren’t a customer of Barbour ABI and are interested in gaining construction intelligence.

Click here to gain 10 free construction project leads to get you started on your journey!